En passant
You are at:Home»Gamin'»Collections»[COLLECTION] Dain Anderson Nintendo US. collector

There are collectors and COLLECTORS! Dain Anderson, founder member of Nintendoage.com, give us the honnor to answer our questions. He shows us his Nintendo collection and explain to us how collecting video games is in the United States. You can contact him by his website NintendoAge.com. The GGS team thanks him a lot for his time and kindness !

-Can you introduce yourself?

My name is Dain Anderson, the founder of NintendoAge.com. Originally from Colorado, I live in Durham, North Carolina inside the United States of America. I’m married to my wife of 6 years, Nancy, and have two children Jarah (6) and Eli (3). Being a father, husband, webmaster and having a full-time job, keeps me incredibly busy, but I try my best to keep things in balance. 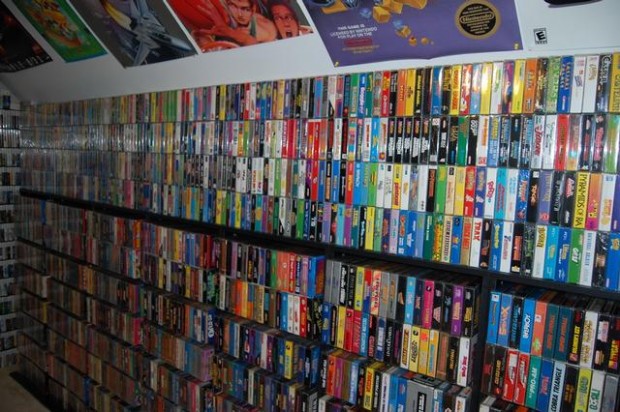 -How did you get into collecting video games, and specifically why the Nintendo brand ?

My entire life, I’ve collected something, whether it be bottle caps, stamps, comic books, toys or video games — it’s always been a part of my personality to collect something, and I can’t think of a time when I didn’t collect. But video games were different than my other collections because they played a central role in my early development, and collecting them allowed me to reconnect with my youth in many ways. Video games provided a lot of comfort for me when my parents went through a divorce, and I’ve always sought out those feelings of nostalgia ever since. In a lot of ways, collecting video games has helped me to heal a lot of wounds that otherwise would still be festering. 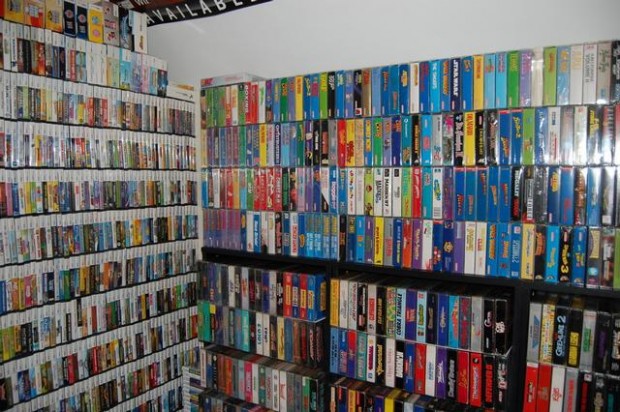 -What is included in the U.S NES’ Full Set ? What are the hardest games to find ? For us, the rarest games are Nintendo Stadium Events or Nintendo World Championships.

Completing a US NES set is quite an accomplishment by collector’s standards, due to having to obtain a copy of Stadium Events, but my answer to what is included to be considered complete might surprise you. The answer is: it really depends on each collector, and what each collector considers to be part of the set. This aspect is somewhat subjective in that many opinions exist as to which games should, and should not, be included. Myriad 6-in-1, by some, is considered a variant of Caltron 6-in-1, only having different packaging and label. Cheetahmen II, found in a warehouse in 1996, well after the NES lifespan (1994 in the US, 1995 in Europe), is another example that some collectors omit from a complete US set. I think both of these games should be included in a complete US NES set, but that’s just one collector’s opinion.

The rarest licensed US NES game is Stadium Events, without question, but it gets a lot more difficult when you take away the word “licensed” because you open the door to unlicensed games, homebrews, prototypes, and other oddities that never come up for sale. If you think about it, just about any prototype is rarer than Stadium Events or the Nintendo World Championships, with fewer copies in circulation, but collectors value prototypes a lot lower because they’re a niche market. A few more highly-contested examples would be Chiller by Sharedata and Wally Bear and the No Gang by AGCI, where only a few copies are known to exist. Again, this is a subjective topic, and it’s really up to the collector to decide what the rarest game is. 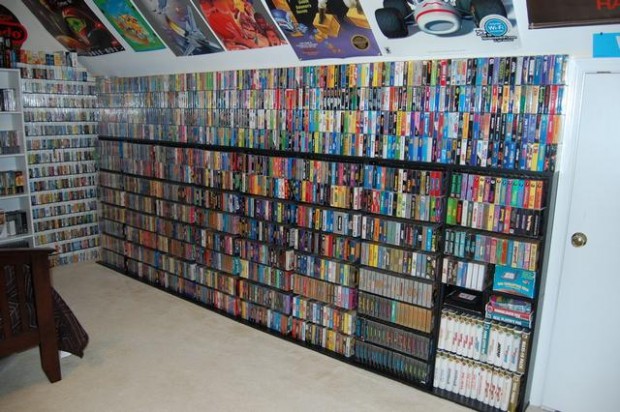 – I saw you have a lot of consoles and accessories. Which are the hardest to find ?

That’s a great question, and consoles are still a bit of a mystery because we’re still finding new variants previously unknown. Some of the system sets that came with pack-ins tend to be a lot harder to find than other sets. An example is the Wal-Mart exclusive Challenge Set that came with Dr. Mario, Super Mario Bros. 3, and the Super Mario Bros. 3 Strategy Guide. For accessories, I’d probably say the UFO Remote Controller by Winner or the Gizmo Controller by Beeshu, but again, there are still accessories being discovered, and so this will probably change over time. 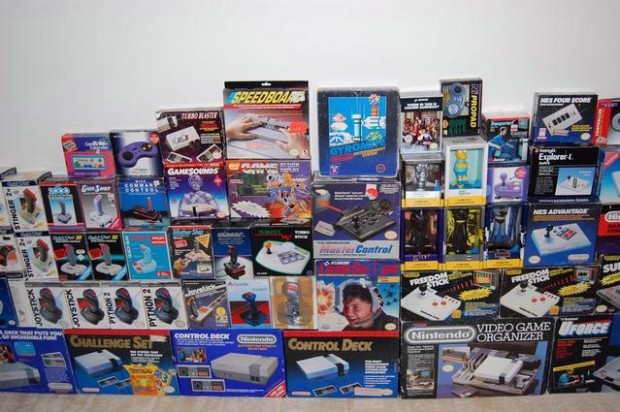 -In France, people love expensive and complete items. What are the collectors’ habbits in the United States? Loose stuff does not disturb collectors? Are the attitudes different from one state to another?

It’s hard to generalize the collecting habits for an entire country, but if I had to guess, there are probably more minimalist (cart-only) collectors than completist (CIB) collectors due to the rising prices of games over the years. In the US, there are definitely a handful of collectors of expensive games, but the majority of collectors in my opinion do not have enough disposable income to afford the key titles like Stadium Events and the Nintendo World Championships 1990. I’d imagine most collectors would love to own these, but the prices are probably out of reach to the average collector. 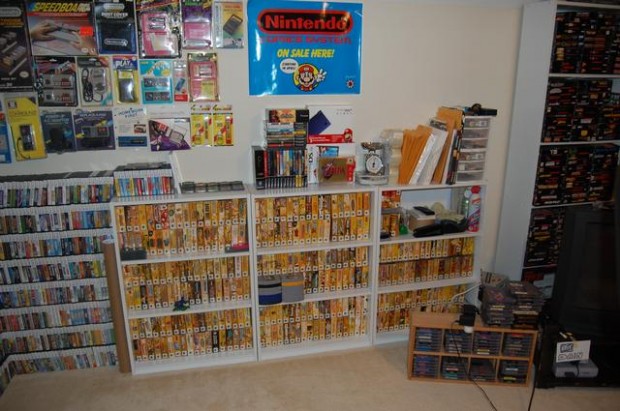 -In France people like to do business on flea markets and garage sales. There are also secondhand shops. How to hunt for good bargains in the U.S.?

In addition to buying online, a lot of people in the US also buy games at flea markets, garage sales, game stores, and gaming conventions. We also have thrift stores and “goodwill” stores (these are basically donation centers) where people can often find games for sale from items that people donate, where the proceeds often go to various charities. CraigsList.com is another local peer-to-peer option for collectors to buy from other collectors in their town, or adjacent towns, without having to resort to buying from sites like eBay. 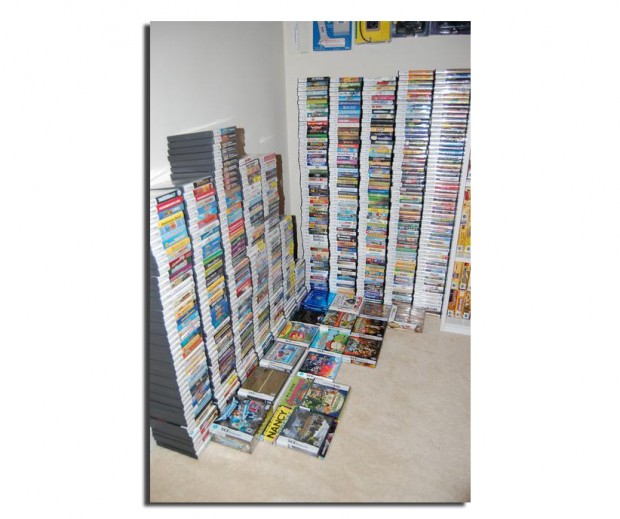 -American collectors are very attached to their U.S. versions. In our country many collectors like European, American  and Japanese games etc.. Some of us are known for their imported games collection. How is it perceived in the United States? Were there lots of import in the 90s? Are you looking for Japanese exclusive games like Iron Commando or European exclusive like Mr Gimmick?

At the time of the NES, I don’t recall that we did any imports at all for the NES. Sachen did bring games to the United States, but their distribution was believed to be very limited, mostly only being found in coastal areas from what we can tell. This is still an ongoing debate in the community as to how many were actually released during the NES lifecycle, if any.

I think it’s a natural progression for some NES collectors in the US to eventually seek out the exclusive titles only released in Europe and, to a lesser extent, Japan. For other rare titles, like The Flintstones, The Surprise at Dinosaur Peak, I would say that the average American collector is not interested in the PAL version. One very big exception would be the PAL version of Stadium Events, which is a lot more affordable in PAL format. I know many collectors personally that own one of the PAL versions as a placeholder for their US collections. Until a month ago, I was one of those collectors that only had a PAL version, and didn’t own the NTSC version of Stadium Events. 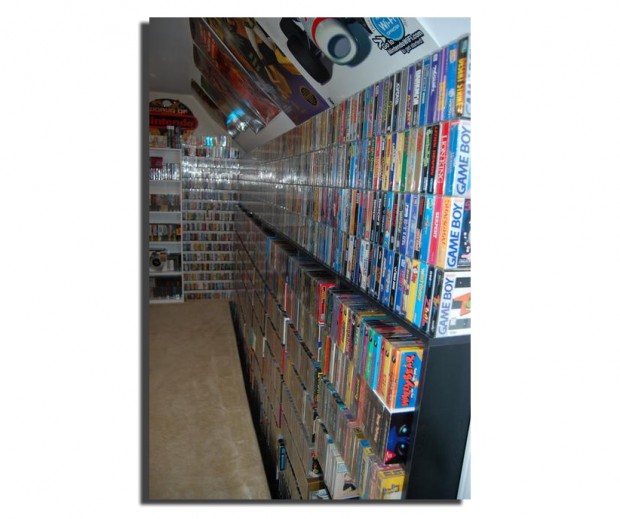 I think it’s really great that foreign collectors are passionate about niches within their respective markets. There are variants or groups of games that are only seen in certain markets, and giving respect to each of these is important for collectors in those regions. I also think it’s important for future collectors that they have the information about these sets, so cataloging this information is a great way to preserve the history of NES collecting. I’d like to add that France is a wonderful place for NES collectors and it has so many interesting subsets that it piqued my interest when I started collecting PAL games. The ASD carts, the really hard-to-find FRA games (like Stack-Up), and the blister pack games that I could only find in France, were all really interesting to me personally. There were also many awesome systems available in France and one I particularly enjoy seeing is the Les Schtroumpfs set. I love this set! 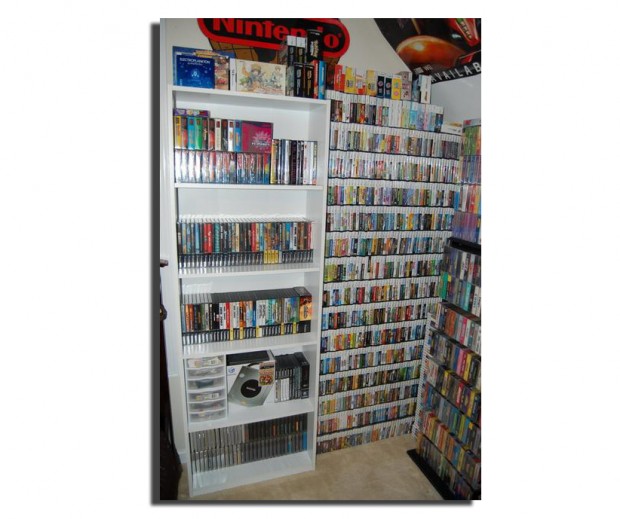 -What do you think of the price spike? In France some people find that prices have became indecent. Are people complaining about that in the U.S. too, considering the fact that money is not a taboo subject for you?

The price spike is to be expected, if you look at the history of collectibles, in general. Each generation, the children of that generation get older and try to reconnect with their youth by buying things they enjoyed as children. This century alone, we’ve seen baseball cards, comic books, and Star Wars collectibles, among others, all go up in value. All of them have increased in price as children have grown up, gotten jobs, and could afford to buy items they couldn’t when younger. As a collectible matures, however, what typically happens is that the key items (like Stadium Events, NWC 1990, etc) will continue to rise in value, while the lesser-rare items will flat-line in value, relying more on condition than rarity to determine value. 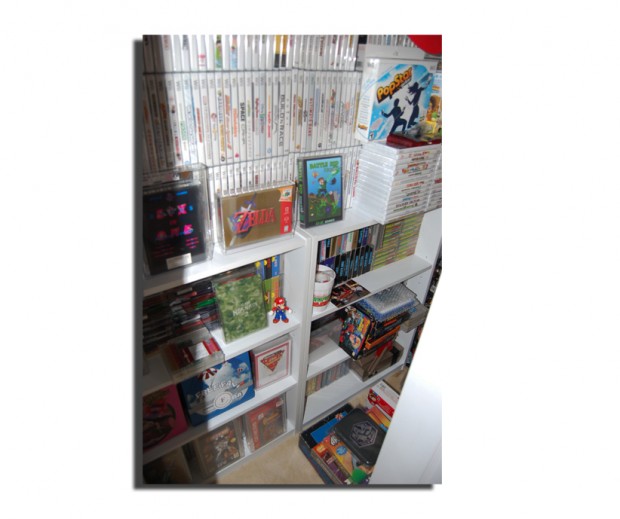 Collectors have to realize this is the life-cycle of collecting. It’s not about indecency and taboo; it’s not about greed; it’s about supply and demand, driven by nostalgia, and as long as people are willing to pay high prices for games, there will always be people willing to sell those games for those prices. In America, we have a saying, “Something is only worth what someone is willing to pay for it,” so if you have demand, you’ll have supply at a price level to meet that demand. If people want to play the games, they can easily find them to play online, so I’ve found that the people that are discontent with prices aren’t looking at the history of collectibles. Europe received many more really cool system sets and accessories than the US, so I’m sure a few European collectors might have more insight into this than I do. 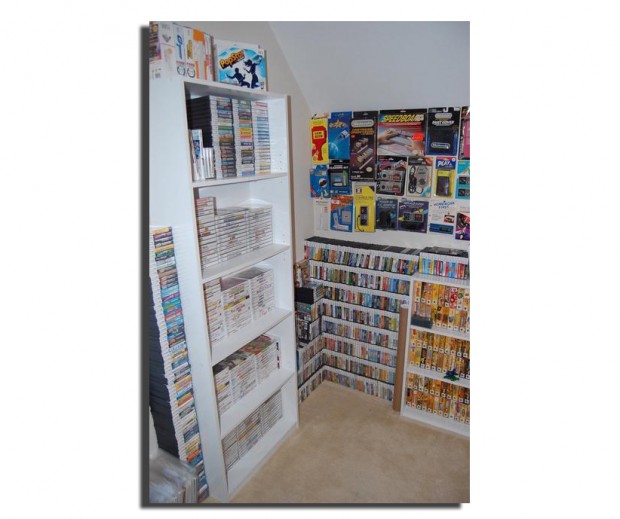 -Beside video games do you have any other hobbies or passions?

I have many passions, but I truly enjoy being active, whether it be walking or running. I try to get out and walk or run at least one hour every day. My family is really my passion, and getting to relive my youth through the eyes of my children is something I truly enjoy. I also enjoy drawing, painting, listening to music, writing, playing Tetris, and watching movies. The list goes on, but I don’t want to bore you! 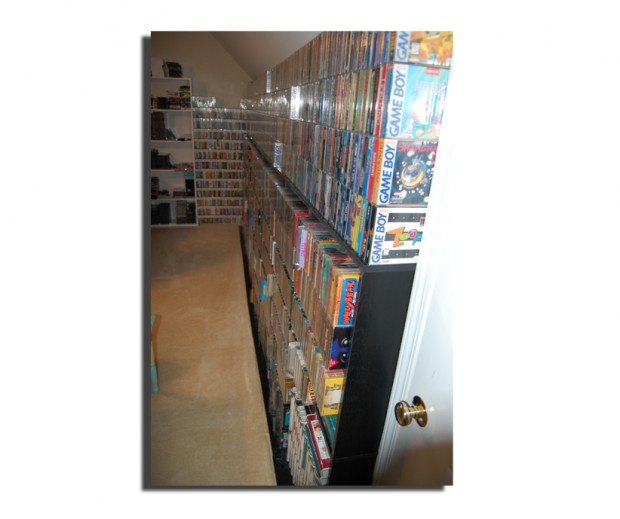 -Any last words for our French readers?

I apologize this is in English because I understand how important it is to speak to an audience in their native language. I did learn some French in college, but I’m afraid my proficiency isn’t very good. I also realize that NintendoAge.com is mostly English, and I take great pride in keeping NintendoAge.com a place where anyone around the world can come and participate in the joy of collecting video games. There are people from 114 countries around the world (over 100 members from France). I take everything on the site very personally, from making sure every member has a good experience, to keeping the site up and running for the world to use and enjoy. I’m only a private message away from anyone who wants to chat about collecting, and I invite anyone reading this that is not a member to come by and join in the discussions. Thank you for giving me the opportunity to be part of your community and I hope you’ll become part of ours. For now, I have to go because Le Tour de France is on TV!